Breakfast at Tiffany's
Enjoyed playing this game?
Rate it → 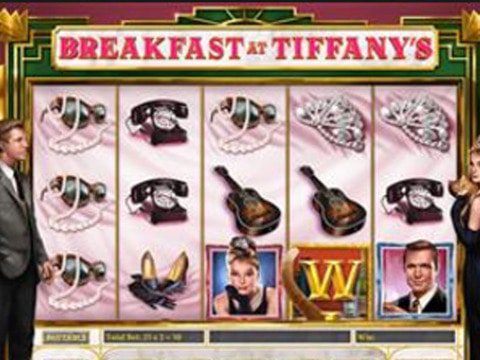 Audrey Hepburn has captured many hearts when she played as Holly in the movie Breakfast at Tiffany's. People got hooked in this 1960s movie that even software developer like Gamesys has been inspired. Thus, the said software creator produced Breakfast at Tiffany's slot machine. Review the game on this page through the free demo version of the game. There is no registration and no download needed to play the game.

Characters and significant items have been taken out from the movie and placed within the five (5) reels of this machine. You will meet the two major characters, Holly played by Audrey Hepburn and Paul played by George Peppard, which can give you some fortune. The two stand at the opposite sides of reels to guide you while playing.

Spin the reels and aim to hit three or more identical symbols to add credits to your account balance. You may place your bet on the 25 available pay lines. You have no power to lessen the number of betting lines because they are all fixed, but you can still adjust the amount of bet on each line. Have your breakfast for as low as 0.01 per line and you are able to spin the reels. For a more delightful gaming experience, you can maximize your bet up to 2 coins per line, giving you a chance to stake 50 coins on a single spin.

Memorabilia from the two protagonists are used as symbols in the reels. These are Holly's guitar, Paul's typewriter, vintage telephone, black hat, classy gloves and heels, shining tiara, and the ginger cat of Holly. All these can give you a good cash when matched. The highest paying symbols are the image of Holly and Paul, as these two can yield up to 1000 times your bet.

Furry Rewards from Breakfast at Tiffany's

Other than the regular payouts from getting similar symbols, Breakfast at Tiffany's slot machine features stacked wild symbol, free spins, and bonus round. Wild icon can be a replacement for other icons to create winning combination. On the other hand, two champagne symbols landing on the first and fifth reels simultaneously will trigger free spins and extra round.

When you get the Free Spins Party, a door will appear on the third reel. The door might reveal another free spin or an invited guest. The guest, which has an equivalent value, will randomly appear to join the party and give you money. One more thing to watch out is the cat's paw that can stop the reel and turn it into a stacked wild. This means more chances of winning, of course.

Visit the Bet Cruise Casino to enjoy a free play slot of Breakfast at Tiffany's and other Gamesys titles. Players from Canada also suggest this gaming site for those who want to play with real money. The site is also accessible using mobile devices, so you can play anywhere you want.