Bombs Away
Enjoyed playing this game?
Rate it → 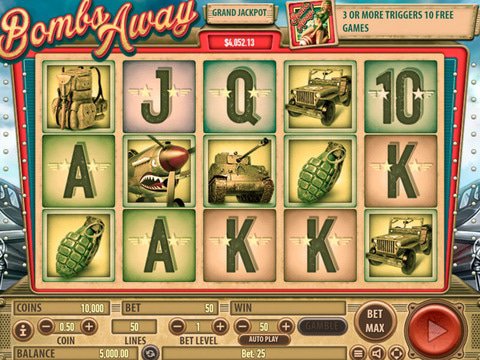 Become bewildered and amazed once more as the Habanero Software Development company takes you back in time, in one of the most dreaded time in the world back in the 20th century, more specifically the 1940s - the World War II. Join the ranks of the army, explore the vast world and be ready to counter the enemies whilst looking for opportunities to gain merits and rewards in this Bombs Away Slot Machine. Know more about this game by experiencing yourself what it could do. You don't have to risk real money at first because you could play for fun here at this page with no registration and no download required. The Bombs Away Free Play Slot Demo in this page will allow you to see how this exciting game successfully became one of the top slots today from Canada, America, Australia and other countries.

As mentioned the game is set to happen during the World War II and that is evident with the background that's filled with fighter jets. Though the background comes with a serene blue color of the skies with clouds, the symbols, the reels and the controls are brimming with the essence of war. Not to mention, except for the background, everything else comes with an undertone of sepia, making it appear more old and fit for the theme. The controls are also ultimately intuitive with every manipulations and changes you could ever imagine to fit your needs. There's even a gamble option that could give you a double or nothing stage in every winning spin. On the reels, there are common card symbols with the lowest amount of prize possible followed by planes, tanks, solider, backpack and a military jeep that are rarer and can give players up to a whopping 200 coins of prize. Winning will also be much easier with the help of the logo of the game that serves as the scatter symbol that could render you with free spins bonus round. The wilds here comes with the bomb symbol and this isn't just simple substitution as it can explode and can turn other symbols into wilds as well that will make it easier to get victorious combinations.

War-themed games may not be the most appealing to peace-loving gamblers, especially ones from Canada, but if you are part of those that do love them, then you could surely enjoy the Pacific Attack Slot as much as you'll enjoy the Bombs Away Slot Machine. With a 5-reel and 15-payline matrix, it comes with lesser paylines than Bombs Away, but it has unsurmountable amount of jackpot prize that vastly exceeds that Bombs Away. In this game, you can even win up to 100,000 coins which is more than enough to tempt any wagers out there.

When playing the Bombs Away Slot Machine, you could get a lot more than what you could ever imagine by making use of the advantages served by the Club Gold Casino. This establishment will bolster your waging funds from the start with a dollar-for-dollar bonus up to $2250 and though it doesn't possess free spins bonus and no deposit bonus, you can still enjoy it via instant and download play which is enough to give you tons of benefits.