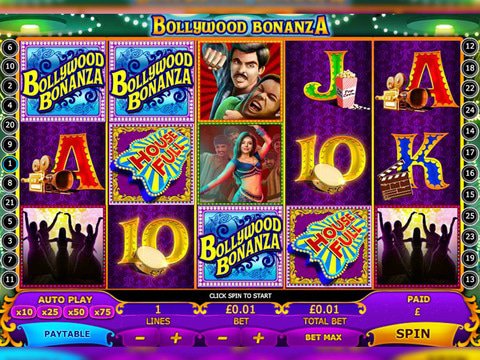 When you hear Bollywood, what instantly comes up to your mind? You won't miss singing and dancing Bollywood actors, colorful costumes and attires, as well as interesting storylines which truly depict the Indian culture. What if we bring this famous Mumbai movie industry right in your gaming platforms, would you still appreciate it? In Bollywood Bonanza slot machine, you get to learn the rich culture of India portrayed in Bollywood through spinning the reels on this featured game. This slot also has different characters and symbols from India to justify what Bollywood really depicts. You may now try this free play slot here with no download required.

This five reel slot machine developed by 888 holdings software has 25 unique paylines its online and mobile players can play on. You can place wagers for as low as 0.05 up to a maximum of 10 credits per spin. The highest stake you can play on amounts to 250 credits which can reward you with the jackpot prize if you land a winning combination on an active payline.

The lowest paying combinations belong to the playing cards which are decorated with movie inspired items like movie coins, popcorn, ticket, clapperboard, and camera. These characters pay you from 100 up to 150 coins depending on the combination you make. Meanwhile, the full moon or the silhouettes of dancing girls reward you up to 200 worth of credits.

Whereas the couple featured on the game's home screen pays up to 300 coins. The lead female star of Bollywood, also known as the heroine grants you with 400 credits; while the hero and the villain, represented by the image of two fighting men, rewards you with highest payout of 500 credits equivalent to your played stake.

The hero, heroine, and the villain characters are also the slot's wild symbols. They substitute to any character on the reels - except for the scatters - to complete a winning line. All winnings from the wilds will have a 5x multiplier.

There are also exclusive bonus features offered in Bollywood Bonanza slot machine. First in the list is its wild feature which involves landing the Bollywood Bonanza symbol on the reels. Line up five of this symbol and win 750x of your total stake.

Next is the instant free games activated when you land three or more scatters anywhere on the reels. This scatter symbol is represented by the Full House logo which is surrounded by bright neon lights. You will instantly get eight free spins and a multiplier ranging from 3x to 50x of your total wager.

If you want to try another film industry inspired slot game, then you must try World Match's Hollywood Film slot machine. Hollywood Film slot machine is basically the counterpart of Bollywood Bonanza. It has five reels and 25 paylines you can choose from. It also features several items you see in the movie houses on its reels, as well as exciting in-game bonuses and rewards.

You can now try Bollywood Bonanza's demo version in 888 Casino with no registration requirement. Canadian players are welcome to play with their real money wagers here to get free spin and no deposit bonuses from this site.