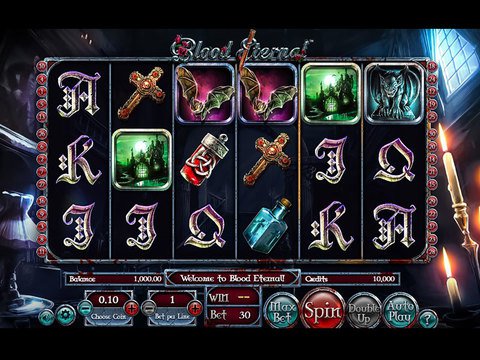 Live an eternal life with the vampires of the Blood Eternal slot machine. No download is required to experience the fear of meeting the vampires and trying the free demo version of this game. The said free trial is available right here on this page to give the players a review on what to expect when playing with the fierce vampires. There is no blood to shed in order to enjoy this game.

BetSoft software has taken advantage of the vampire trend and created the Blood Eternal. The interface of the game will probably give goosebumps to the players because of its creepy ambiance. A haunted feel will creep out of the screen with the help of gothic designs and black color dominating the background.

There are 6 reels and 30 pay lines within the screen of Blood Eternal slot machine. This is slightly higher compared to the average number of reels found in the other games. The reels are showing 3D graphics of symbols and animation. Fan of horror stories will surely be hooked in this game. Upon accessing the game, players will encounter vampire bats and gargoyles. There is no need to worry as players are also given cross and holy water to fight these evil creatures. To balance out, there are also the common playing card symbols such as J, Q, K, and A. The letters are beautifully displayed in gothic font to match the theme

Offerings from the Vampires of Blood Eternal Slot

Finding similar symbols on the reels can yield a certain amount of prize, but vampires won't stop until they are able to convince their players to join their crowd. Therefore, vampires will offer lots of rewards and prizes that players will absolutely love. One of the cool offerings from the vampires are the bats. This symbol can come in pair inside a single slot, which will be counted as two symbols. This means that players can have a possible win of 12 bats in a single pay line. Obviously, it can yield bigger prize than usual.

Other than the bats, the wild symbol of the game is also interesting. Human and vampire both serve as wild symbol. When a vampire icon appears beside a human icon on the reels, the vampire will bite the human, locking both symbols into place. Yes, they serve as sticky wilds that can up the player's game. During each spin with sticky wilds, the vampire's bite will splatter blood on the reels. Any reels that will be stained with the splattered blood will turn into an extra wild icon.

Vampires are not always in the dark side. They can also be found in a light and less gruesome atmosphere such as The Vampires slot machine powered by Endorphina. This game has 5 reels and 25 pay lines, lower compared to the specs of Blood Eternal.

Sports Interaction Casino can be the perfect gaming site for Canadian players who wish to try Blood Eternal free play slot. No registration is necessary to open the gaming site and players can even use their mobile devices to play. Bonus and free spins await players who will grab the chance to play with real money on this casino.