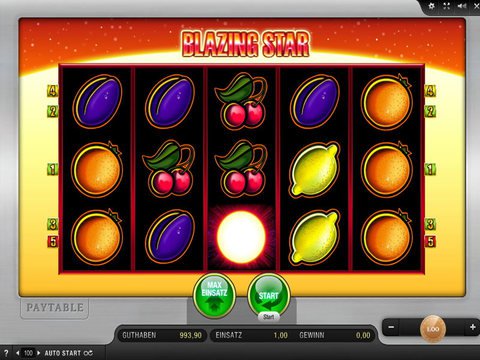 Despite its futuristic name, all you get is one hot ball of death (or life depending on how you see the sun). Don't expect this one to be about spaceships or fighting aliens on distant planets. It turns out that the makers of Blazing Star slot machine from Merkur Gaming are taking things a tad too literally. You can play the game for free on LVBet Casino. The top Canadian gambling site offers Blazing Star slot machine along with a host of other titles. The best thing is you don't have to pay in order to play these games. They are carefully selected to make sure they cover all genres, and everybody will find a game they would like. Signing up will also offer you the chance to get as much as $1,000 in no deposit bonus, which you can use to bet on some of the slots, as well as 1,000 free spins.

As already stated, the Blazing Star slot machine refers to our sun. That's exactly what you are going to find in the backdrop. You have the sun and some fruits. The graphics are quite simple, but if you've been playing slots for a long time you might wax nostalgic over the animation.

The weird thing about this game--and it takes a bit of getting used to--is the fruits symbols, which have nothing to do with space or stars. You would think that Merkur Gaming would at least put the moon there or some astronauts or a space rocket, at least.

This one has five reels and only five pay lines. But if you are hoping that what the game lacks for graphics, it might as well make up for the number of wilds and scatters. Well, sorry. No such luck in that department.

If you do find the blazing sun symbol, you can at least pray to get five of them on the reels to get as much as 10,000 coins credited to your account.

You can opt for the ladder game of the card game. For those unfamiliar with the terms, the ladder game requires you to choose a particular gambling mark and find out your prize. The ladder, in this case, refers to the fact that your prize gets bigger the higher you get to the ladder. In the card game, you pick red or black and if you answer right, you win a prize and get to pick again.

There's not much game out there similar to the Blazing Star slot machine in terms of the design. But if you like fruit-based games, then you would love Snake, which has five reels and 30 pay lines. The symbols are fruits and the snake as the wildcard. You can bet as small a penny and a high of $10. The jackpot you will win can go as high up as $40,000.