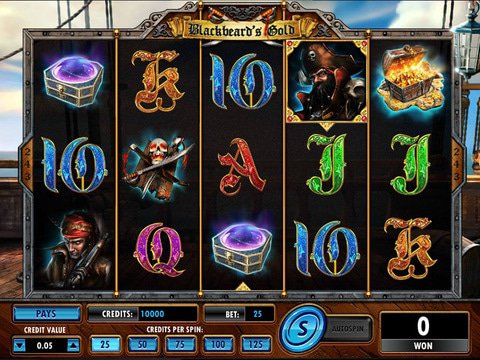 The Pirate life has always been for those who've always desired to scale the ends of the world and amass treasures that goes way beyond what the norm could ever imagine. It's much like what wagers persists to do, but in a much grander, bigger and harder way. Amaya Software has made sure to make the path to riches easier, but more invigorating by imbuing the Pirate life into the reels. Not to mention, the life of a pirate whose fame has resounded across the seven seas from antiquity until today - that's Blackbeard. The Blackbeard's Gold Slot Machine is centered on the prime character, Black Beard and his dazzling adventures across the treacherous ocean. Aboard his ship, can you amass riches for yourself and gain fame along the way? The Blackbeard's Gold free play slot demo will allow you to take a sneak peek at this game and experience its grandeur right away with no money, no registration and no download needed.

You'll surely find yourself in a daze as you wake up, open your eyes and see the vast expanse of the sea while you're onboard a highly-detailed and realistic ship. Aboard the ship of Blackbeard, you'll see the columns, deck and walls that have been tested by time while the sky permeates the fact that it's going to be a great day for seeking treasures. The reels at the center is ridden with peerless symbols that will help you gain riches beyond your imagination while the controls that's embellished to blend in with the overall theme will help you gain control of the stakes present in every spin. Opportunities to win in this game is practically innumerable especially with the game's matrix that boasts up to 243 paylines in its 5 reels. Value of bets in this game could go from a paltry 25 coin spin up to 125 coin spin. As mentioned, the game has sleek symbols to match-up its peerless visuals. There are various ships on the reels from the Revenge, Victory and Galleon. There are also card icons, compass, a pirate crew, a pirate symbol, flag, Blackbeard and a treasure chest steaming with gold. The game also features lucrative and luxurious bonuses up for grabs, from the Galleon Bonus and Victory Bonus that could provide massive free spins, multipliers and wilds with different conditions.

The fame of Blackbeard is unlike any other pirates and that could be proven simply with the fact that there's also other games based on this pirate other than the Blackbeard's Gold Slot machine. Habanero has also developed a game based on him, entitled the Blackbeard's Bounty, equipped with a 5-reel and a 25-payline structure. It comes with lots of features to aid you in your voyage while 10,000-coin jackpot prize awaits your luck to take its prime.

Though relatively new in the industry, we still recommend players to indulge on Blackbeard's Gold Slot Machine through Cresus Casino. This game will equip you with 100% match-up to $150 while rendering you 20 free spins to boot. There's also a sleek loyalty program for persistent players while top security and customer service assures the best worry-free experience for you. An added bonus is the smooth and intuitive system of the site for your superior experience.