Bird of Thunder
Enjoyed playing this game?
Rate it → 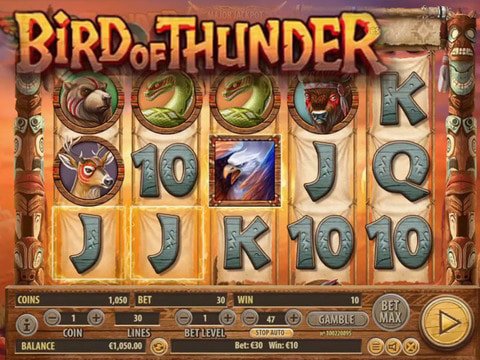 History junkies will surely get excited on this new slot game from Habanero software which reconnects you back into the Native American era right in the comforts of your online and mobile platforms. Feel this nostalgia in the Bird of Thunder slot machine which features historic characters and creatures which also exhibit their mythical powers on the reels. Get marveled while the mythical eagle spirit assists you on winning big on the slots. You can now try this free play slot on this site with no download required.

Travel back in time in this five reel slot machine which has 30 active paylines for its players to wager on. You can place stakes for as low as 0.01 credits up to 25 coins maximum. You may also opt to relay on the autoplay feature until you win the maximum jackpot worth 2,500,000 coins.

Just like any other slot game, your goal is to land series of combinations of different characters and symbols on active paylines to win their equivalent payouts. These include the usual card characters which pay you from 40 credits up to 60 coins per spin. The mystical deer rewards you with 100 coins; while the majestic owl gives you 150. The fierce snake grants you 250 credits; whereas the ferocious buffalo pays you 500 coins at most. The highest paying character belongs to the valiant grizzly bear which rewards you with a whopping 1,250 coin payout.

You should also watch out for the legendary eagle which acts as the game's wild symbol which substitutes to any character on the reels - except for the scatter character - to complete winning lines. The eagle also pays you with instant payouts as much as 1,250 credits when you land three or more in one line.

You could also win bonus spins from the slot's scatter symbol. This is represented by the eagle totem which may appear anywhere on the reels. When three or more of its icon appear on the screen, you will trigger the bonus feature and get rewarded with 10 free spins. All winnings during these free games are multiplied with you total stake. This racks up your total winnings with just one free spin.

The wild and scatter symbols may still appear during this special feature. For every one scatter character landing anywhere on the reels will reward you with an additional spin. You can't retrigger this special feature when you land three or more during your free games. On the other hand, the wild symbol will call upon the Bird of Thunder which flies down the reels to replace any character on the reels to complete a line.

If you truly want to explore more on the Native American culture, then you must also try Microgaming's Mayan Princess slot machine. In Mayan Princess, have a throwback experience on the five reels which have several characters including pyramids, glyphs, leopards and many more. Play with all 20 paylines and win the jackpot at stake worth 10,000 credits.

You can now try the demo version of Bird of Thunder slot machine in Bitstarz Casino with no registration requirements. Canadian players are also welcomed to play and get free spins and no deposit bonuses.