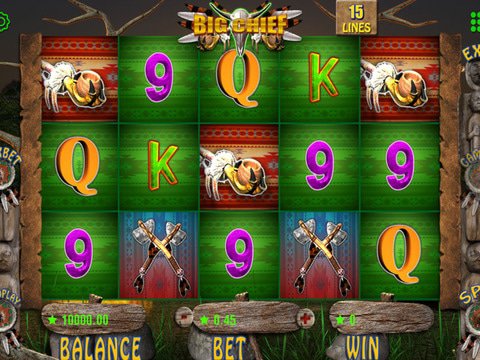 The intense competition in the gambling scene, especially in the online slots category may have pushed back other developing companies out of the scene, but not Booming Games Software. Despite being new, the tenacity of the software and its courage in tackling new things is truly worthy of admiration and there's no doubt you'll be in more awe and amazement as you embark on the warrior's path in a game that will expose the Native American Culture at its finest - the Big Chief Slot Machine. The name of the game says it all, but one thing you won't be able to see through the title is the game's overall quality. However, you don't have to guess it because through the no download Big Chief free play slot demo here, you can immediately enter this world that has mesmerized even Canadian gamblers. Do you have what it takes to lead this tribe to rise again?

The Big Chief and the Tribe

If you're finding it hard imagining what the game would be like - imagine movies like The Revenant or other tribe-based movies that will often show you the struggles and life-threatening situations in the wilderness. The Booming Games Software has once again challenged themselves in the creation of this slot and truth be told, they have totally done well with it. The graphics and visuals of the game are worthy of being at the top of the industry with other renowned games, while the incorporation of the subtle and unique sound in the game is truly ingenious. The game comes with tribal and tiki statues standing at the side, exuding a more tribal aura for the game, while the animation of the 5-reel and 15-payline game as it spins is truly noteworthy. In the game, you'll see eagles soaring through the sky, a drinking cup, a bone of a beast, weapons, a tribe warrior and the Tribe Chief. The tribe Chief plays the role of the scatter in the game, allowing him to generously hand out free spins to those who get 3 or more of him. The wild symbol on the other hand, is played by the warrior which provides a staggering 3000-coin jackpot. Though the game lacks other innovative features, there's little to no doubt that the atmosphere it provides is more than enough for it to impress almost any wager out there.

Firelight Slot from Aristocrat is also a game that tackles the world of the Native Americans and renders them on a completely mystical approach. The 5-reel and 243-payline structure of the game allows it to provide hefty rewards and winning opportunities while it also utilizes wilds, free spins, scatters and more. Although the game is truly compelling and presents the Native American world in a completely different way, it sadly comes with an unimpressive jackpot prize which is something that one needs to consider.

If you want to play the Big Chief Slot Machine, it would definitely be beneficial if you spin it within the premise of Tropezia Palace Casino. The first deposit on the site could award you with up to $100 with its match-up promotion. Though it can only be played via instant-play version, it's packed with a multi-software system and topnotch characteristics that guarantees stellar experience while in the site.