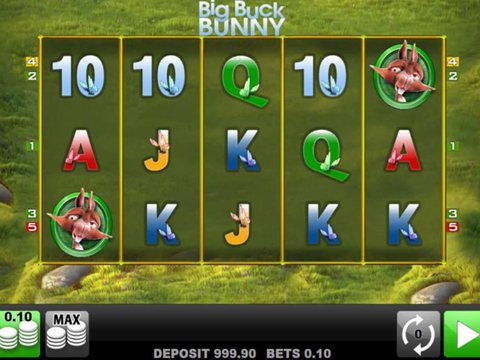 With a name like Big Buck Bunny slot machine, this one from Merkur Gaming has its work cut out for it. You can't just put the bunny in any game without expecting it to be fun and entertaining. You just unnecessarily dialed up the expectation from punters, but did it fulfill its promise? Go to LVBet Casino so you can try out the free play and find out for yourself. This Canadian site is your go-to website for anything slot-related. It boasts an extensive list of titles which means you are likely to find the game that's right for you. Each game is also reviewed and comes with a description to give you an idea what it's about. The games are also ranked according to the number of stars, which will immediately provide you with the ranking in terms of quality and popularity.

Big Buck Bunny is based on the computer animation from Blender Institute. The animation exploits of, you guessed it, a monster bunny. Despite his size, however, he's very gentle. But he's being harassed by three small rodents named Frank, Gimera, and Rinky. There's a dark mood to this cartoons as two butterflies died as a result of the rodents' bullying and Buck wants revenge.

This one has five reels with just five pay lines. The symbols follow the animated shorts. Unlike the cartoons where the rodents are downright evil, in the slot machine you want to see them as much as possible because they can offer some pretty nifty prizes. If you can get at least three scatters, you get up to 50 free spins. During the bonus game, all winnings are multiplied by three.

Getting the rodents is nice and all, but you really want to land the big prize--Buck himself. Getting five Buck symbols will get you $10,000 easy if in case you wagered $10. But if you want to be conservative, you can just bet from five cents and up to five bucks. You can use the plus and minus symbol to adjust the amount of your wager. You can also try the autoplay feature, which means you allow the machine to decide your luck for you.

There's also a ladder game and card gamble as sort of mini-games for the Big Buck Bunny slot machine. Make sure you make the correct decision in order to maximize your winnings.

There are many games, similar to Big Buck Bunny slot machine, which are based on digital shorts or animated films. For instance, you can join the zany characters of Eric Cartman, Stan Marsh, Kyle Broflovski and Kenny McCormick in the South Park Reel of Chaos. You can play the game for free, with no download and registration. Fans of the animated series will surely love the antics of the characters as well as the many bonuses hidden in the game.