Best of British
Enjoyed playing this game?
Rate it → 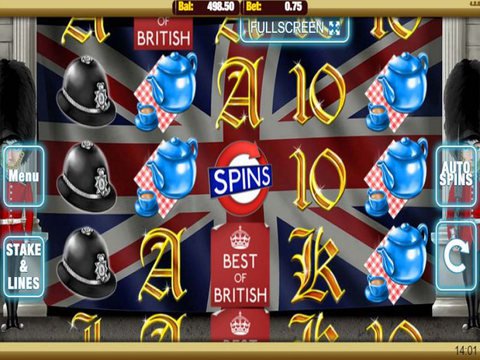 There's a heap of reasons as to why many would certainly agree that British people are one of the most amiable people across the globe, exhibiting the epitome of elegance, sophistication and calmness. There's just too much glorious characteristic behind its people and of course, the country itself and with it as the basis Nektan Software has created the Best of British slot machine which pretty much marks a strong invasion force of British people towards the deepest cores of the slot industry. Revolutionizing the industry as a whole with this step, there's no doubt that you'd want to try out the game immediately. Fortunately, you do not have to worry about depositing real money right away because you can have a bit of the game's action with its no download demo version alone, which is the Best of British Free play slot placed here.

It is extremely easy to know that the Best of British Slot Machine is all about the culture of United Kingdom and everything we love about it and its people. This is because the background isn't any form of abstract artwork, nor a realistic setup of the British environment - it's the flag of United Kingdom which simply couldn't get any more straightforward than that. Not to mention, two firm and robust British Queen's Guard stand at the opposite columns of the game, which further solidifies its theme. The game's reel also takes up the entirety of the game's screen with control system that's neatly placed in both left and right ends of the screen. The spin is at the right while at the left comes the control center where you can change the paylines and betting range accordingly, up to 15 pay lines and 15 coins per spin. When you spin, the trumpets executing the glorious English tone also gives the game a more gallant appeal which is sure to motivate you to spin the reels more. The game is also pretty rewarding and is packed with everything stunning from UK. There are card icons with decent payouts while bigger payouts will come from a tea set, a guard hat, a double-decked bus, fish fillet on fries, the game's logo and the English Pit bull. The highest payout can be achieved from the game's logo in red, which awards up to a whopping 500x your bet, while the English bulldog plays the role of the Wild with a bit of twist to its effects.

Another game that will take you to a particular alley in UK is the Big Ben Slot from Aristocrat. As implied in its name, its prime target for inspiration is the Big Ben but, in a setting when the sun have already set. Still, its 5-reel and 25-payline gameplay still packs quite a punch for players as they will still stand a chance to win up to $60,000, especially with the help of the game's special symbols and useful features.

Despite being a new kid in the block, we recommend you to play the Best of British Slot Machine at Enzo Casino. It has lavish and intuitive setup topped with some of the lucrative bonuses from 30 free spins, 250% match-up deposit up to $1500 along with VIP and Loyalty Bonuses to exploit.