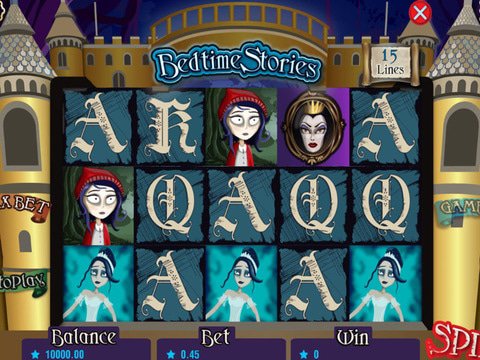 With the exceedingly tough and unshakeable tight competition in the gambling scene's online slots category, developers have always been tirelessly pursuing the path in creating the game that will irrevocably capture the attention of users, impress and forever imprint itself in the hearts of many. However, that is easier said than done especially as more and more games end up in same categories to the point that each are already looking like rip-offs of one another. In the midst of all the chaos, an innocently-name game enters the market - the Bedtime Stories Slot Machine, but despite its title, anyone would surely find themselves hard-pressed to not be curious about this game. It is developed by the Booming Games Software, and though this company has quite a few games only, it simply can't be belittled. The no download Bedtime Stories free play slot demo here will give you the chance to see for yourself what makes this game different from its competition.

A Childs Dream Turns into Nightmares

Since antiquity, Bedtime stories have been named that way as they provide a way of relaxing the minds of children as they prepare to go asleep. However, Booming Games Software aimed to twist it into a new direction, leading the game to a somewhat creepy direction that may even end up making you think that a Grimm Brother's original story would be told. The 5-reel and 15-payline structure of the game is simply superb as it is embedded on a castle-like structure that is placed at the center of the game. The game's background is as gloomy as it can be while a subtle singing voice echoes out with a slow tune of the piano, creating an incredibly goosebumps-inducing scene. The game's betting range can also go up to 45 coins and even though high rollers may be disappointed with it, its rewarding jackpot could certainly more than make up for this. In the game, you'll see a gloomy bride, a pointy-nosed man, a creepily smiling frog, a Goth girl, and the evil witch. The Goth Girl plays the role of the scatter, allowing it to reward luscious prizes wherever it falls topped with the capability to serve free spins. The evil witch on the other hand, could help you get winning combinations with its wild substitution prowess. With a mix of bedtime stories turned creepy, there's simply a lot of things to look forward to in this game.

Little Pigs Strike Back Slot from Leander Games, is yet another bedtime story that takes a more fun and entertaining route than the Bedtime Stories Slot Machine. It tells the story of the three little pigs when they've finally had enough of the Big Bad Wolf. Within the 5-reel and 25-payline of the game, you'll surely find yourself extremely entertained and invigorated with a rewarding prize as jackpot topped with features and symbols to help you throughout your path.

Though creepy, Bedtime Stories Slot Machine still pays out quite a hefty sum of money and with the help of Tropezia Palace Casino, you'll stand a chance to get its grand prize. You'll be able to indulge on extra $100 from the 100% match-up of the game, while if you decide to join their VIP Club, you could experience exclusive bonuses to boot.