Battle for Olympus
Enjoyed playing this game?
Rate it → 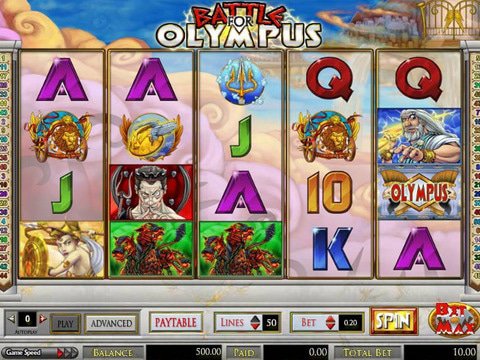 Greek Mythology has stretched its influence all over the globe since antiquity and with its divine and peerless concept that could bewilder just about anyone, it's not surprising that its presence in the waging world has become unshakeable and influential. There are simply countless games today that's derived from this concept and when everyone thought that it could not get any better, Amaya Software produces yet another addition to this category with the title, Battle for Olympus Slot Machine. The title corresponds to the intensity of the game and that stays true in terms of its popularity on Canadian Gamblers and more. If you want a hassle free gaming experience to try out this game with no registration and download needed, you're at the right place. In this page, you'll be able to know more about the game through the Battle for Olympus free play slot demo topped with a review below to enlighten you along the way.

A Divine and Heavenly Battle for Luck and Riches

Luck can be considered to have a tinge of will of the heavens, but it's not a certainty if such a thing could help you gain the upper hand as you make your way in an epic and intense battle held at Mount Olympus, an abode for the Gods. In this divine realm, though the sky comes in pristine blue, the intensity of battle is evident with different colored clouds that permeates the air. There are brown thick and swirling clouds, purple clouds and heat that scorches the ground, providing enough dramatic atmosphere that will invigorate any wager. The center comes with a peerless 5-reel and 50-payline structure, paired with an intuitive control system that will give you enough control of your destiny and stakes. The card icons in the game may seem insignificant, but its satisfactory prizes and amount in the reels is enough to make anyone wish to land them on the reels. Higher-valued symbols features detailed and quality symbols of Gods like Hades, Zeus and Mercury along with a fabled demon dog, the Cerberus. There are also symbols of icons for Gods, which adds up to the game's highly rewarding system. The battle in this game may be treacherous but there's enough help from bonus symbols and scatter symbols that will help you gain access to mini games and free spins, which may be just what you need to excel in this war.

If a war on the Olympus is too much for you, why not just explore Olympus on a regular day as featured on the Legend of Olympus Slot from Rabcat. This game comes with a 5-reel and 20-payline structure that's slightly inferior to the Battle of Olympus Slot Machine. Still, it comes with high-quality graphics that's vibrant and topnotch while featuring various Gods and providing top symbols from scatters, wilds and more.

Equipping yourself with the best weapon is a must if you want to ace the Battle for Olympus Slot Machine and you can do that via the blessings of Cresus Casino. In this site, you'll be granted powerful promotions from the star with 20 free spins bonus and 100% match-up to $150. It also possesses topnotch security with superb customer service, on top of taking pride on its mobile and flash-play versions.