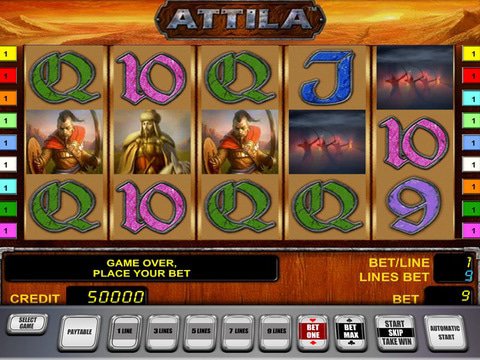 What if we bring the classic Roman battlefields - complete with knights and swords, archers and bows, warriors and temples - into the realms of the modern gaming industry? This will surely be a hit for history buff and battle-centric junkies! In Attila slot machine, online and mobile players are treated into an action packed reel game which involves epic battles between armies from the kingdom of Attila the Hun and your own empire to protect your land from being conquered by Attila. Intense clashes between his warriors and your defenders will surely fill your interest for this game. You may now experience more of this free play slot here with no download required.

This new ancient-themed slot game developed by Novomatic software has five exciting reels with nine active paylines for its gamers. You may place wagers for as low as one credit per spin up to a maximum of 1,000 coins per payline. Carefully choose between 1, 3, 5, 7, or 9 active lines for you to win exciting rewards and bonuses for every winning combination you get.

Just like any other typical reel game, you must line up winning character combinations on the active paylines. These slot symbols involve classic Roman characters like knights or warriors, archers, Roman temples, and Attila himself. The conventional card numbers and letters are also present on the reels.

The lowest paying combination belongs to the card numbers and letters. Next to it is the combination of the sacred temples which may reward you a maximum of 25,000 coins. Killing the archers in a maximum payline gives you a bounty worth 50,000 coins; while the warriors grant you a 100,000 credit reward.

You may get highest paying reel combination after defeating Atilla himself. A combination of his character wages a maximum payout worth 1,000,000 credits. This is so far one of the largest payouts in the reel gaming industry.

Attila's character also acts as the game's wild symbol. When his character appears on the reel, it will automatically replace any symbol - except for the scatters - to form a winning combination on a payline. This will instantly reward you with corresponding payout.

The battlefield symbols play a vital role on this slot machine game. These symbols represent the game scatters which trigger a special bonus feature when they appear on the reels. Find three or more of these scatter symbols on the game screen, and you will instantly receive up to 225,000 credits. Aside from these bonus coins, 16 free spins will be rewarded to you. All winning payouts during these free spin games will be tripled. These free games can also be reactivated every time the scatters appear on the reels.

Nonetheless, this is the only bonus feature available in this reel game.

If you're a true-blooded history aficionado, then you might also want to check World Match's The Last Crusade HD slot machine. The Last Crusade HD has five reels and 25 unique paylines. It boasts its stunning graphic display and overall theme which wholly focuses on Crusaders. However, it does not provide any wilds, scatters, or free spins to its online and mobile players.

You may now try Attila's demo version in Cashpot Casino with no registration requirement. Canadian players participating in this site are also greeted with free spins and no deposit bonuses.