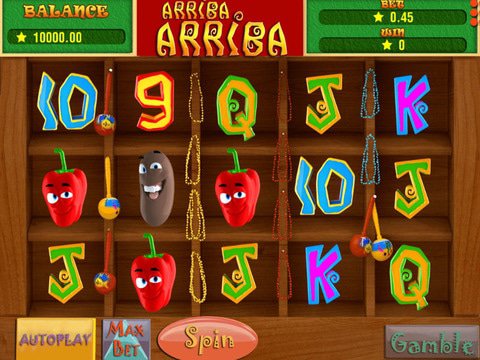 Whether you're playing a sports game, a video game or even a waging game, cheering has always been a motivational approach of viewers which could provide great assistance when done at right times. However, more than that, it also shows culture and more, giving way to the concept hidden with the Arriba Arriba Slot Machine, developed by the popular new kid in the block, the Booming Games Software. Though the Arriba comes from the Spanish Language, with the two cultures having similarities from diverse points, it is not weird that Mexican-themed games and even Restaurants are named with this title. Not to mention, the game will surely live up to its hype as there's no doubt you'll have an electrifying experience within the premise of this game. If you're ready to go and spin its reels, but you're still reluctant to part with your money, the no download Arriba Arriba free play slot demo here will let you enjoy the game, risk-free.

You'll instantly know that the game is without a doubt, Mexican in all its forms and glories, through its symbols that are certainly from the aforementioned country. In the game, you'll be introduced to a desert-filled landscape, with red rock formations and cactuses, topped with the scorching heat of the sun. In the game, card icons are as abundant as they can be, but the more amazing symbols range from bell peppers, tomato, potato, corn and a chili pepper. These ingredients are infused with grinning faces as if they have something in store for you and for all I know, it's definitely the fact that they're the ingredients that could help you build your perfect Mexican dish - or get superb rewards from the game. The game boasts a 5-reel and 15-payline gameplay, while the chili pepper and the corn are imbued with extra prowess to help you win. The former is the wild that can be substituted to help you win combinations while the latter is the scatter, capable of bestowing free spins to lucky users. The game not only comes with this impressive lineup of symbols and rewards, but also a compelling graphics and subtle audio that's non-intrusive at some point yet bursts out when you spin and get winning combinations.

If all the ingredients served in the Arriba Arriba Slot Machine has made you crave Mexican food, then the next business in line would be to spin the reels of Mexican Cook Slot Machine. This game is developed by World Match and takes pride in its 5-reel and 15-payline gameplay. Its symbols and features are nothing short of spectacular, but the jackpot is only a measly $1000 prize which makes it imperative to think more about it before playing the game.

Are you interested in giving Arriba Arriba Slot Machine a spin for real money? If you're convinced that it's a game worthy of your hard-earned money, playing it at Tropezia Casino would be the best path for you. This site takes pride in its topnotch multi-software system, superior encryption, top banking options and unparalleled customer service. Other than that, it also has an impressive line of bonuses for you to revel on, from 100% match-up deposit to $100, comprehensive and exclusive VIP Club promotions and a whole lot more.