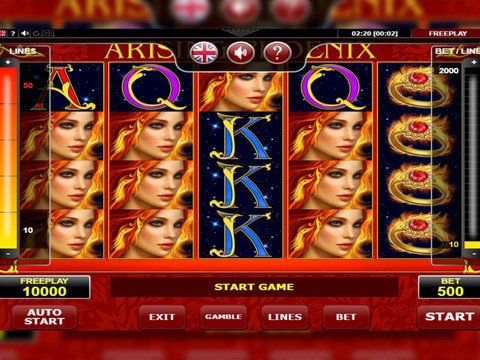 Legends after legend have already been born since time immemorial, but there are still those that may have stayed the longest in the realm, but are still considered to be classics that could never be forgotten - one of which is the Legend about the Phoenix. The majestic fiery bird known as the Phoenix with death that burns it to ashes from whence it will leave again, leaves anyone in awe. It is simply no mystery why many ends up being enthralled with this goosebumps-inducing mythology, even to the point where they'll be more than happy to delve into reels that hosts this kind of theme. If this is the case for you, Amatic Software has you back with their developed game entitled the Arising Phoenix Slot Machine. Review the game yourself with the Arising Phoenix free play slot demo with no download and no registration needed, and see for yourself if it really does deserve to represent this ever-lasting legend.

Feel the Fiery Majestic Aura of the Phoenix

Though the game may not have the most aesthetically compelling backdrop, it still comes in a fiery red color with delicately made patterns that could magically induce a feeling of mystery and grandness. The reels takes up most of the game's space, providing clear and vivid vision of the symbols' intricate and marvelous designs. The game comes with Amatic Software's common control system, paired up with a gamble option for more lucrative opportunities for wagers who are willing to test their luck in every winning spin. The game consists of various symbols as well, from card icons to more divine symbols like a feather, flower, a ring and the heaven-sent beauty portraying the role of the phoenix in human form. The game comes with a massive 50-payline structure featuring a line win bet that provides better winning chances that are also fair and not too inconceivable. The phoenix is of course, the highest paying symbol but the role of the wild as well which is portrayed by the Phoenix bird itself, is simply not negligible. If you get a line win of the girl at the first reel and two wild symbols on the reel, you could even trigger a re-spin that will surely be beneficial for your conquest to riches and glory.

It's pretty hard to find another game like the Arising Phoenix Slot Machine that could portray the Phoenix Mythology and justify its glories. However, if you're looking for a similarly titled game, then the Phoenix Sun Slot from Quickspin could be what you're looking for. It is a 5-reel and 243-payline game that offers plenty of ways to win that showcases its lucrative qualities. Still, far from what its title suggest, the game is actually an Egyptian-themed game which you should take into account before playing it.

Enjoyment in playing could be tripled just by knowing you'll have more money to play with for free and you could have exactly that by following our suggestion to play at Mars Casino. Here, you'll be able to indulge on a 50 free spins bonus with a welcoming deposit match-up of 100% to $400. This means you could enjoy an extra $400 if you max out your first deposit, proving just how generous the site is to players.