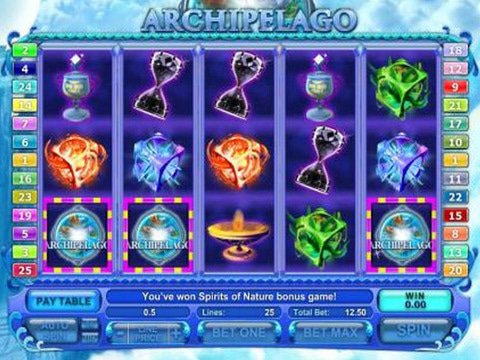 The world isn't how it was back in antiquity and the olden times. Parents back in the recent centuries became tighter and tighter with their offspring, life became harder to the point where it became shackles to one's wings of freedom and now, there are people who are not exhibiting their full potential due to all of these problems. However, If you've got the sheer guts or inner feeling that you're destined for something bigger - something that far exceeds others of our time, then maybe the Archipelago Slot Machine, a creation of Games OS, is the outlet that you're looking for. Feel the thrill and invigorating experience served by travelling across seas and discovering the closest things to magic in this striking game that will leave you in awe. Witness its world in the no download Archipelago free play slot demo in this page with no registration needed and be convinced that it's worth it to engage on real-money gameplay.

Discovering a Magical World through Adventures

It is apparent from the title of the game alone that it is set to surround the adventuristic spirit veiled around travelling, but don't belittle the Archipelago Slot Machine as it will surely take you to places that has never been seen before all while discovering ancient artifacts and treasures that may just leave you with bags full of money when you go back home. The moment you set foot on this Games OS product, your jaw will surely drop in astonishment as it depicts a perspective where you're soaring through the clouds and toe-to-toe with huge bluish rock formations, the ephemeral sky filled with fluffy clouds and the scintillating light of the sun. The 5-reel and 25-payline slot of the game is systematically arranged at the center of the screen, with a robust form that makes it appear like it won't tumble even at the altitude you're already in. In the game, you'll discover various things from differently colored power cubes, hourglass, statues and cups, along with more powerful symbols like a globe, a Magic Dish and Golden Cups. The three last symbols mentioned portrays the bonus, wild and scatter symbols, respectively. The wilds has a substituting capability and it becomes a mega wild on the third reel. The Scatter golden cups grant free spins, allowing you to have more opportunities to win. The Globe is the game's logo, giving you entry to the lucrative bonus game it possess and allowing you to venture yet another magical aspect of this invigorating slots.

The Archipelago Slot machine is truly mesmerizing despite its reels being too small for the screen. If you want another game of its kind, the Ace Adventure slot will keep you company. It is from the World Match software and it comes with a 5-reel and 25-payline matrix. The pilot in the game takes you to a darker adventure with tribes and alike, but still with a chance to bring home massive payouts and glory.

We recommend players to play the Archipelago Slot machine through the highly revered establishment, 888 Casino. This well-reputable site has been known in the industry for ages and comes with superior availability through download and mobile along with massive bonuses from dollar-for-dollar to $1500, 7 free spins bonus and $15 to $888 no deposits bonus.