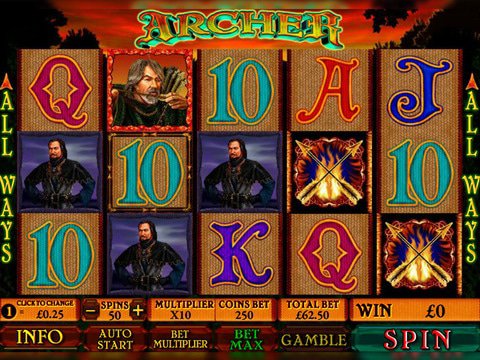 Another Robin Hood inspired online game is making its name in the virtual gaming industry today. In Archer slot machine, players are hyped on the immersive graphic display, appropriate music background, and the overall feel of this game which generally fit its medieval and patriotic theme. To know more of this slot game, you may readily play Archer free play slot here with no download required.

This 5-reel game developed by Playtech software boasts its 243 fixed paylines which give you the chance to win on your every spin 243 ways. This unique feature allows you to place wager for as low as 25 credits up to a maximum of 250 credits which is equivalent to $1,250 per spin.

Reel symbols are also in line with the overall theme of the game. These include characters like the classic A to 9 card symbols, the Sheriff of Nottingham, the Friar Tuck, the Maid Marian, flaming arrows, gold coins, and Robin Hood. All these symbols have their own payout equivalent on the paytable

The combination of Robin Hood characters rewards the highest payout which amounts to 1,500 credits. Gold coins act as the game's wild symbol. When these wild characters lined-up on reels 2, 3, and 4, it will replace all other regular symbols on the grid "" increasing your chances on winning.

The appearance of three or more scatters, represented by the flaming arrows, on the grid rewards you with 7 free spins which have a definite multiplier. This multiplier will depend on how many scatters appear after the spin. You will have the chance to get 2 times, 10 times, or 50 times multiplier if you have 3, 4, or 5 scatters on the reels, respectively.

Aside from these features, Archer slot machine also has a gamble option where you have the chance to double or double half your total winnings in the round. As well as an autoplay feature which allows its players to set the number of spins the reels will go automatically.

All these features are available on both the online and mobile platforms of the game.

To activate the Expand and Split bonus feature, you should get a symbol which has the arrow border. Then you must look for the flaming arrows on the grid. The flaming arrow symbol will pierce the character with the arrow border which will split it in half and expand. These symbols will not replace the other grid symbols.

This special in-game feature increases your chances on getting winning combinations and exciting perks.

If you are looking for a similar themed game, you may try OpenBet's Robin Hood slot machine. It is a 5-reel with 20 paylines available video slots. It also offers free spin bonuses in certain combinations on its reels, as well as exciting progressive jackpot options for its players. The game also features an archery themed mini game which rewards a whopping 10,000 multiplier to the total stake.

With no registration required, you can now play the Archer slot demo version at Slots Heaven Casino. They also allow Canadian players to participate and enjoy no deposit and free spin bonuses with real money wagers.