Apollo God of the Sun
Enjoyed playing this game?
Rate it → 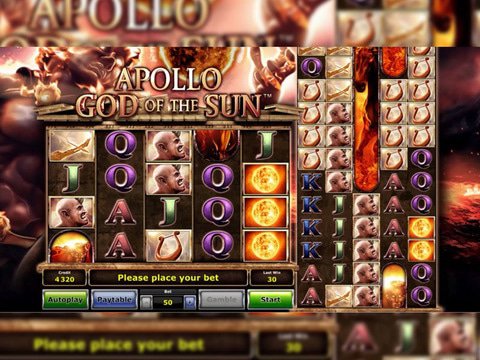 Apollo God of the Sun

Without a doubt, many websites have already taken you to varieties of rides across the age of Gods - from Mythological Norse Period, Greek Gods and many more. Although there are also games that have already featured specific Gods as their stars, one that's not often portrayed in the scene despite its magnificent prowess, Apollo. Greentubes Casino, is a long-running software developer already and with its keen eye and swift response, it has developed the Apollo God of the Sun Slot Machine. There are a few games within this specific category already but, this one definitely sets itself apart from competition with more unique drive and features. You can experience the heat of excitement from this God of Sun yourself, with no painful risks for you to bear, through the Apollo God of Sun free play slot demo. You can enjoy the company of this Greek God, with no registration and even no download needed.

With the environment ruled by the one only Sun God, you should have already expected that the Apollo God of Sun Slot machine is filled with brimstone, fire and apocalyptic flames all across its corners. You may think that it is pure destruction at first sight but, you'll soon realize that it's a thing of beauty. Apollo himself is the one featured across the background with staggering attention-to-detail and within its midst, comes the game's unique set of reels. There are two reels in this wonderful game and together, they provide a whopping 100-payline matrix across its 10 reels. The game is truly epic in diverse proportions and this is even more so when you realize just how lucrative its gameplay is. In the game, you'll see ancient symbols aside from the Card symbols along with even more special symbols for you to pay attention to. The Sun God Apollo, by itself, pays up to 5x your bet while the Sun Symbol and the Bonus symbol are powerful symbols within the game. The Sun is the wilds of the game with power of substitution, more commonly known with wilds in the slot industry. However, this is something that transforms to stacked when certain conditions are met, like during free spins. Free spins on the other hand, is something you can gain if you luckily get the bonus symbol of the game, allowing you to gain more winning opportunity. In the game, the stacked wild is something you should cherish because it can cover the reels of both the two reel sets in the game, welcoming even up to 250x your bet as the jackpot of the game.

Immerse yourself in the Egyptian Gods in the Age of the Gods: Furious 4 Slot from Playtech. It takes a different mythology than the Apollo God of the Sun Slot Machine but, with its impeccable and high quality 5-reel and 20-payline gameplay, topped with progressive jackpot to boot, there's no reason for you not to try this game out.

You should also play the Apollo Slot through the Magik Slots Casino. Its dollar-to-dollar match-up to $1500 is truly one of the most impressive welcoming bonus you'd see online along with more promotions for you to exploit but other than that, it is even available in flash-play, download and mobile version.