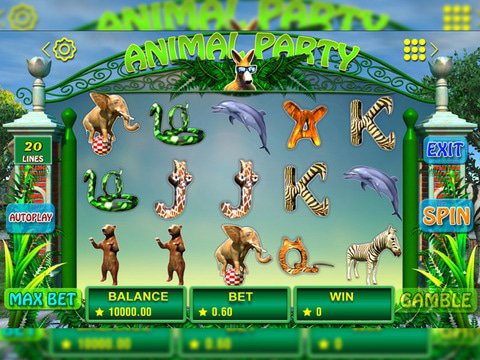 Despite its young age in the industry that gives it an inborn disadvantage at its early stages due to its inexperience and rather unknown services to many, Booming Games has continuously proven itself to be a rising star that's increasingly becoming more popular with its few games in diverse categories. One of these games landed on the animal category, providing the perfect entertaining endeavor with the zoo animals - the Animal Party Slot Machine. The game is just how it sounds as it will welcome you to a reel full of amazing surprises and outstanding rewards all while allowing you to rock it out with plenty of zoo animals. Partying with animals may be the last thing on your mind but, you'll surely feel otherwise once you experience it. The Animal Party free play slot demo in this page will give you a heads up of what to expect from this game by allowing you to play it for free with no download, no registration and no hassle.

Partying Wildly in the Zoo

When Partying with animal is brought us the subject of the theme, there's no doubt that you'd expect something more cartoonish than what the Animal Party Slot Machine offers. Just through this, Booming Games shows off that it's not a paltry developer as its game exhibits a stunning 3D graphics with animals that are as realistic as it can be. However, you don't have to worry because even with this kind of realistic appeal, the animals in the game are not simply standing, but are doing circus acts and talents that you will rarely see in the zoo. The game comes with a 20-payline structure with bets that could go over to 60 coins per spin. Unfortunately, the controls itself are not that user-friendly. Though it's very easy to manipulate, the fact that the controls for betting manipulation are placed in another slide makes it rather hassling. Still, it is controllable while you can also scour the zoo in some kind of way as each slide shows different backgrounds. In the game, there are card icons designed for the zoo, zebra, a standing bear, an elephant on top of a ball, a dolphin and a fierce, suave kangaroo. The Kangaroo is the top paying symbol of the game and also its wild, offering a whopping 30,000-coin jackpot while the bear is the scatter, offering free spins with its mighty paws.

Sheriff Gaming also wouldn't back down with their Zoo Zillionaire Slot, boasting a compelling 3D graphics with realistic art approach on top of its very rewarding 5-reel and 20-payline structure. Though there's a lot of winning opportunities in the game with its various features and special symbols, the jackpot prize of the game only hits up to $4000, an amount that may not be so attractive to higher rollers.

With the Booming Games young age in the industry, there's only Tropezia Casino at its back. However, this is more than enough because through this site, you'll be able to savor the maximum winning potential of the Animal Party Slot Machine with over 100% match-up to $100 initial deposit, comprehensive clubs with exclusive promotions and heaps more benefits to indulge on.