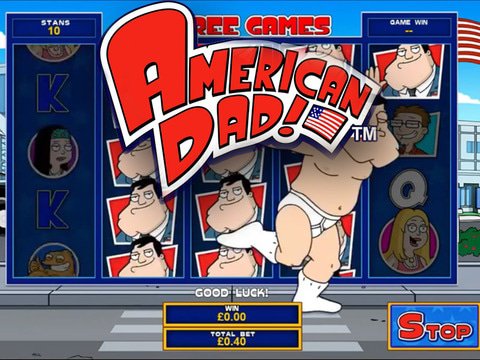 Join your favorite cartoon family led by Stan Smith and get ready to win some amazing rewards. This American sitcom has been brought to the gaming world through the American Dad slot machine. Experience the fun and some shenanigans from this quirky family by playing the demo game right on this page with no download and no registration required.

Playtech software has recreated the funny scenes from a television series into a gratifying gaming machine. This animated sitcom of Seth MacFarlane has captured the hearts of many viewers, and now it tries to capture the gamers too. The gaming interface depicts the American flag by placing the starry blue reels on a red and white stripes background. Characters from the animated series are used as the symbols of the game. Other than the familiar faces of the family, the common playing card symbols are also utilized as icons.

American Dad slot machine lets you play on five (5) reels with 40 betting lines. The number of pay lines cannot be adjusted, which means you are required to play them all. Good thing, you can still control the amount of stake on each line. With at least 0.40 coins in hand, you can spin this game.

Options such as Auto Spins and Turbo are available in this game. You can simply sit back and relax while watching the reels spin on their own using the Auto Spins button. For players who still want to manually spin their own luck but prefer to have a faster turn, use the Turbo button.

Living the American Dream with Freebies

This game is not just built on humor, but it is also jam-packed with rewards and features. Members of this American family, such as Francine, Steve, and Hayley, can offer you up to 150x when you hit three or more identical icons on a single pay line. The father of the family, Stan, can give you so much more that can go as high as 250x your bet.

Roger, the weird looking alien, is the highest paying symbol of the game. This creature also serves as the wild icon that can replace the other symbols in the screen. However, Roger has no ability to substitute the game's logo, which is the scatter symbol of the game.

When you hit the American Dad slot machine logo on the first and third reels, you will be given a re-spin for free. Landing the logo on first, third, and fifth reels will trigger the Schmooblydong Wheel. This feature lets you enjoy 25 free games together with a specific character from the series.

Stacking Stan lets you get additional stacks and cash. Francine's Holy Grail might give you an expanding wild, while Hayley's Progressive Multiplier can increase your winnings up to 10 times. The Wheels and Legman feature also gives 25 free spins leaving wilds on each spin.

Other cartoon series are also now invading the gaming world. You may also want to play The Simpsons slot machine powered by WMS. The characters from the hit series will absolutely reward you with hilarious scenes and huge cash prizes.

Canadian players can go to Slots Heaven Casino to try the American Dad free play slot. The game is also mobile ready so you can play on the go even with real money.