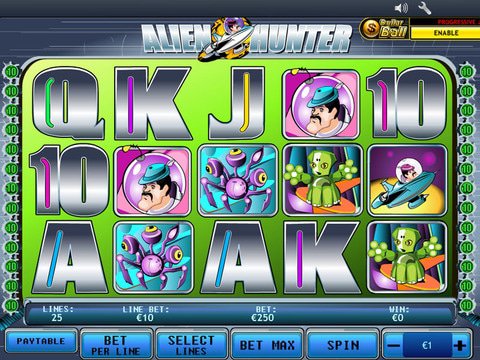 If you're fond of space adventures and alien hunting missions, then this featured online game is the best choice for you to try. In Alien Hunter slot machine, you participate on hunting down alien creatures and win on the reels at the same time. Impressive rewards and in-game bonuses await its players. You may now play and experience the fun Alien Hunter free play slot here with no download required.

This video slot machine has 5 reels and 25 fixed paylines which was developed by Playtech software. The game has an old-fashioned graphic display and not much of those gaming features since it's one of the oldest slot games in the industry. Nevertheless, it still brings its online and mobile players the excitement on its special bonus features and payouts.

Reel symbols and characters revolve around different space creatures and elements. These include a spaceman, spaceship, alien creatures, alien eggs, and a caged alien which acts as the wild symbol in the grid. It replaces all base symbols on the paylines which might bring you a whopping 10,000 times multiplier for your wager.

The spaceship represents the scatter symbol in the reels. Three or more spaceship scatters on the grid rewards you with extra spins ranging from 5 up to 25 free spins.

Aside from the payouts you get on a winning payline, Alien Hunter also lets you enable the Dollar Ball Jackpot which is only activated when you play with real money. This jackpot feature allows you to win progressive rewards and cash prizes.

When three spaceman symbols align on reels 2, 3, and 4 of an active payline, then the Spaceman Hunting Bonus Round is initiated. This hunting mini-game requires you to hunt up to 6 alien creatures and win the corresponding prizes based on your chosen game mode "" Skill or Luck.

In the skill mode, you must hunt down at least 6 aliens within the 10-second limit. Your winnings depend on the type of aliens you catch. Quicker aliens means a larger reward compared with the slower ones. If you didn't catch one, a consolation prize is given at the end of this bonus round.

If you just want to enjoy the game with no time limit and slower alien creatures, then the luck mode is the right choice for you. Catch 6 aliens and win a prize which is determined randomly.

There is also a collecting bonus feature in this game which is only activated when the egg characters appear on reels 1 and 5. This brings you to a mini-game where you will have to choose from the alien eggs to win multipliers which will double your stake. Beware of the egg which contains the evil alien or the "headjumper" because it will immediately end this bonus round.

If you still can't get enough of the alien creatures in Alien Hunter, then you may also try Net Entertainment's Aliens slot game. This alien-themed slot boats its impressive 3D graphics for its cinematic reels accompanied by eerie in-game music which truly brings the thrill to its players. It also has 5 reels but with only 15 payline options which brings its players with massive multipliers, re-spins, and free spin bonuses.

You may now play Alien Hunter slot machine demo version in Slots Heaven Casino with no registration required. Canadian players are also welcomed to participate with no deposit and free spin bonuses.