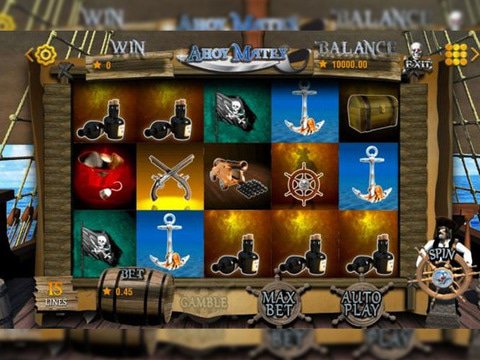 Are you feeling the wind? A storm is coming and it's time for the crew to hoist the sales and Avast ye towards the glory and grandeur of the vast sea. Pirate games never fail to trigger anyone's curiosity and craving to adrenaline-inducing adventures and with it as a theme, Booming Games has managed to create a game that will truly entice anyone and keep them clicking the spin in the hopes of getting treasures with just a few clicks away - the Ahoy Matey Slot Machine. Don't worry however, because playing the game would certainly lead you to realize that you're not fooled if you've joined this lively crew as massive opportunities await for you, which could even be the chances you need to finally amass wealth that's enough for you to have a relaxing life ahead of your life. The no registration and no download Ahoy Matey free play slot demo could give you a tour of the ship with no risks present.

With dangers and trials up ahead the crew, rewards follow and such is fate and destiny. You'll surely feel your energy surge towards the sky as you board the game's ship and as you engrave deep in your mind, the appearance of the board's deck, a fully-opened sale and the vast expanse of liquid known as the ocean. Although the ocean and the sky are only partly visible in this Ahoy Matey Slot Machine, you could still clearly see the sunny atmosphere while the reels at the center are done to complement the ship through its wooden design. There's only about 15 pay lines in the game which you could manipulate freely with the controls, along with bet that could go as high as 45 coins per spin. This kind of betting range is truly unimpressive in the eyes of mid to low rollers but, it is still enough to excite anyone. You'll get prizes courtesy of the ship, if you find the wheels, liquors, guns, swords, anchor, pirate flag, cannons, treasure chest, the captain and even a captain hook outfit. The Captain of the ship himself, plays the role of a wild symbol in this game while the Treasure chest plays the role of the scatter, which can bring massive free spins to lucky and fated ones. Still, despite the game's visually compelling graphics and gameplay, there are quite a few features here which may be a deal-breaker for some.

When it comes to waging, pirate games is one theme that has an overly abundant supply of games and the Ahoy Matey Slot Machine is just one from a deep pool of pirate games. The Pirate Treasure Hunt Slots from SkillonNet is also one of a massive pirate game shelves, providing a 5-reel and 20-payline structure for sheer fun and excitement. The game's theme and concept is already evident with its title and with a $50,000 jackpot, no one would simply be able to decline it.

As a pirate, funds are very important and if you engage on Ahoy Matey Slot Machine, playing it at Tropezia Casino would do you wonders. Despite the game's limited availability that's only through flash-play, it comes with generous match-up promotions, VIP Club and more bonuses on the way, which will greatly amplify your winning chances.