Age of the Gods

Age of the Gods
Enjoyed playing this game?
Rate it → 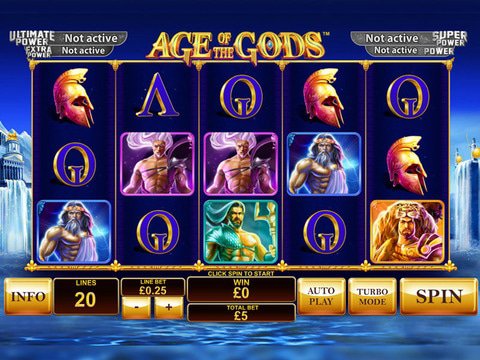 Age of the Gods

Age of the Gods Game Review

Ancient Greek mythology themed games are now gaining prominence among online and mobile players for its stunning visual presentations and impressive storylines. No question that it has already conquered the virtual world of slot machines. In Age of the Gods slot machine, our Greek gods and goddesses take part on your success to get the perfect combination on winning exciting rewards and bonuses. To experience this game, you can try the Age of the Gods free play slot game in this page with no registration required.

Age Of The Gods Slot Review

This 5-reel slot developed by Playtech Casino software is a progressive jackpot game with 20 fixed paylines and different payout options.

It has popular in-game characters like Athena, Zeus, Poseidon, Hercules, Aphrodite, Hades, and the laurel wreath as the wild symbol. All these symbols have different multiplier equivalents depending on the combination it lands on the grid. Multipliers range from 12 times up to 10,000 times the total stake.

Bonus Features from the Gods

Age of the Gods bonus feature is only triggered when three or more scattered logos are present on the grid. The reward multiplier will depend on the number of scatters found. These multipliers range from 3x, 10x, and 100x for the appearance of three, four, or five scatters respectively.

The combination of three Athena grants you with a random multiplier ranging from 2x to 5x before every spin. Zeus characters give you a 1x multiplier which increases by +1 for every three spins. A wild symbol is also locked in the middle of the grid.

With Poseidon's, five grid symbols will turn into extra wilds, while in Hercules' mini game, a stacked Hercules character will act as a wild symbol for all base icons except the scatter symbols.

There is also a Pantheon of Power On Reels bonus which rewards you 200 times the stake or 10 times your wage as cash prize. This will be only activated when all 5 gods appear successively on one active payline.

For those who are looking for other similar themed games, they may want try World Match's Mythos slot machine. Just like Age of Gods slot machine, both games also feature Greek gods and goddesses as their characters, as well as different rewards and bonuses.

You can now play the Age of Gods demo version game in Slots Heaven Casino with no download requirements. The site also allows Canadian players to play with free bonus spins and no deposit.