Age of the Gods: Prince of Olympus

Age of the Gods: Prince of Olympus
Enjoyed playing this game?
Rate it → 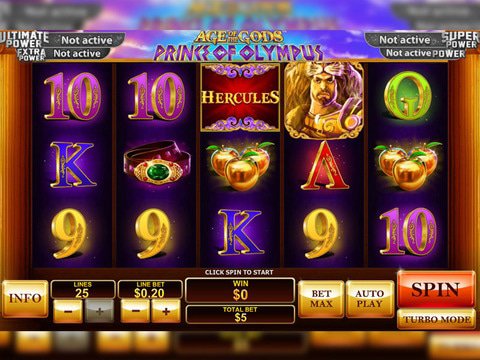 Age of the Gods: Prince of Olympus

Age of the Gods: Prince of Olympus Game Review

This 5-reel game with 20 fixed paylines developed by Playtech software offers its players with impressive in-game features and exciting bonuses both in the online and mobile platforms.

One of the main features of this game is the detailed graphics and display it provides its gamers. Set inside a temple, Prince of Olympus supplies the reels with symbols in line with the theme and history of Hercules. These include iconic characters like clubs, golden apples, belts, the nine-headed Hydra, and the three-headed dog Cerebus. All these symbols have different multiplier conversions on the game's paytable.

Game multipliers only activate when these symbols line up on an active payline. The lowest multiplier you can get is 2 times your total wager. Five Cerebus icons in a payline give you a whopping 4,000 multiplier of the total stake.

In terms of its special bonuses and features, Age of the Gods: Prince of Olympus slot machine benefits its players with 4 different options.

If you have the Hydra character simultaneously appear on both reels 1 and 5, then the Hydra Bonus feature is activated. This is a mini-game where you help Hercules defeat the Hydra by hitting its heads with arrows. Each successful hit gives you a definite amount of cash prize.

When you manage to slash the Hydra, the game will award you a 5 times multiplier. The Hercules Rage feature may also be randomly triggered wherein all hydra heads are destroyed.

During the Free Games bonus, the last special feature may be activated. The Herculean Strength feature happens when the wild Hercules symbol appears on reel 3. As soon as it appears on the grid, it will automatically lock and expand then 2 re-spins will be given to you.

Aside from these special game features, Prince of Olympus also offers progressive jackpots for its players.

If you're looking for a game with the similar theme and gameplay, you may try RTG's Achilles slot machine game. It has 5 reels and 20 unique paylines for its players. It also has a generous payout of free spins and multipliers as you progress in every round.

Other similar themed games include title like the Thundering Zeus slot machine.

You may now play Age of the Gods: Prince of Olympus demo version, with no download required, at Slots Heaven Casino. All Canadian players are welcomed to participate with free spins and no deposit bonus on their real money.