Age of the Gods: King of Olympus

Age of the Gods: King of Olympus
Enjoyed playing this game?
Rate it → 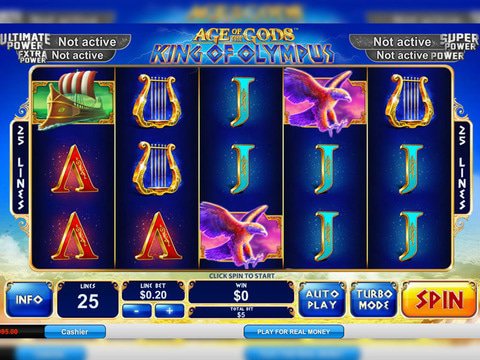 Age of the Gods: King of Olympus

Age of the Gods: King of Olympus Game Review

It is now time for the King of Olympus rule the virtual gaming industry. Online and mobile players have been playing themed games with several Greek mythology gods, demi-gods, and deities. But this time, it will all be about the god of the thunder and the sky to bring you loads of excitement in this new slot machine installment. In Age of the Gods: King of Olympus slot machine, Zeus takes over the reels and unleashes his powers to help its players win huge amounts of jackpots and exceptional in-game rewards. To know more on this game, you may try here the Age of the Gods: King of Olympus free play slot game with no download required.

In this 5-reel slot machine game developed by Playtech software, players are treated with 25 active and fixed paylines, a large paytable of multipliers, and progressive jackpot options. It also has a turbo mode which allows its players to control the speed of the gaming reels.

King of Olympus has several unique characters and symbols on its reels. These include classic Greek vases, lyres, eagles, ships, and Zeus which acts as the wild game symbol. Payout multipliers range from 5 times up to a whopping 3,000 times of the total stake depending on the combination per active payline.

The highest paying combination of 5 Zeus characters on one active payline pays 3,000 times the total jackpot stake which may amount up to 300,000 credits.

Other high valued bonus characters present on the reels are the Pegasus, Aetos, and Dios which also gives you chances on winning exciting bonuses.

King of Olympus slot doesn't offer the same variety of in-game bonus features as with the other Age of the Gods games. The only interesting special feature of this game is the number of free spins it gives after a successful line up of three wild symbols.

You will be rewarded with 10 free spins with starts with a times 2 multiplier when three Zeus characters appear on the grid. This multiplier will increase by one point after every 2 spins on this bonus round. Along with these free spins, an extra Zeus character is locked in the middle of the grid during these spins.

Aside from these free spins, Age of the Gods: King of Olympus slot machine also boasts its progressive jackpots for its players. This jackpot game is randomly activated during regular spins. You must at least match three characters during this mini game to win the huge amounts of jackpots. Winnings range from Power, Super Power, Extra Power, and Ultimate Power. The latter jackpot prize has the largest reward total.

If you're looking for another game with almost the similar gameplay and theme, you may try Lightning Box Games' Thundering Zeus slot machine. With five reels and 20 unique paylines, this game also focuses on Zeus as its primary in-game character. It also offers its players with exciting rewards and bonuses.

With no registration required, you may now play Age of the Gods: King of Olympus' demo version at Slots Heaven Casino. Players from Canada are also allowed to participate and enjoy the no deposit and free spin bonus of this game.