Age of the Gods: Furious 4

Age of the Gods: Furious 4
Enjoyed playing this game?
Rate it → 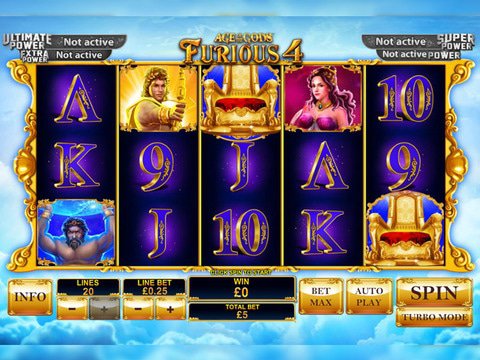 Age of the Gods: Furious 4

This 5-reel slot game developed by the Playtech software has 20 fixed paylines and four progressive jackpot options for its online and mobile players. It also has a Turbo Mode which allows its players to spin the reels even quicker for a faster gameplay.

Multiplier payouts range from 5 times up to 2,000 times of your total wage. These payouts depend on the number of characters and symbols lined up on an active payline. More active paylines means more chances of winning.

The golden throne symbol, which acts as the scatter, multiplies your stake up to 200 times when three or more symbols appear on the grid. Whereas the Furious 4 symbol acts as the wild which provides a multiplier ranging from 40 times to a whopping 10,000 times your stake if you have five wild symbols lined up on a payline.

Aside from these exciting multipliers, Furious 4's progressive jackpot selection is also enticing more players to participate on their slots.

This bonus in-game feature activates when you find three or more scatter symbols on the grid. You will be awarded with 12 free spins for this round. This mini game has 4 different Furious features which will be triggered when one of the 4 gods covers the middle reel.

When Apollo covers the middle reel; the Age of Light bonus feature is activated. This will give you 4 Age of Light free spins and the Apollo characters will substitute for the other base symbols in the grid except for the scatter and wild.

Having Prometheus in the middle reel activates the Age of Fire feature with 4 free spins. Prometheus characters also cover reel 1 with the extra characters on the other 4 reels.

Lastly, the Age of Endurance feature is triggered when Atlas' symbol covers the 3rd reel which grants you with 3 free spins. Atlas symbols will also substitute all base symbols except for the scatter and wild.

If you want to experience other online games with the similar theme, you may try WMS Gaming's The Legends of Olympus slot machine. Both these games also offer exciting rewards, impressive multipliers, and in-game bonuses.

You may now try the demo version of Age of the Gods: Furious 4 slot game in Slots Heaven Casino with no registration required. All Canadian players are also welcomed to participate on this game with no deposit and free spins bonus.