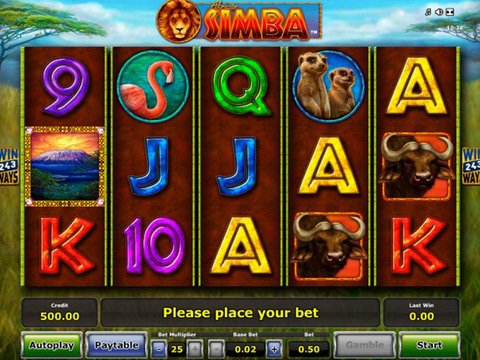 Experience the thrill of the safari and feel the excitement of exploring these wild terrain in this new slot machine game developed by Novomatic software. In African Simba slot machine, players are treated into one-of-a-kind adventure in the harsh desert plains while enjoying this reel game in the comforts of their own homes. The slot has an overall theme which revolves around wild animals, extreme savannahs, and the exciting African wildlife for its online and mobile players. You can try and experience more of this featured free play slot here with no download required.

African Simba boasts its five active reels and 243 unique paylines where their players can wager in. These paylines have payouts ranging from 250 up to a maximum of 125,000 credits which can only be acquired in specific character combinations on the reels. The higher wagers placed the better chances of winning the highest payout value.

The least paid characters are the classic playing card symbols from 9 to A. Next in line are the combinations of meerkats or flamingos. Having 3, 4, or 5 of these characters in a line will earn you 50, 150, and 1,500 credits respectively.

Buffalo characters in an active payline grant you at least 100 up to 1,500 credits. While the highest paying winning payline belongs to the giraffe which rewards you from 200, 1,000, and 5,000 credits for a combination of 3, 4, or 5 symbols respectively.

The lion acts as the wild symbol. This character replaces the other game screen symbols - except for the scatters - to complete a winning combination in an active payline.

Aside from these features, African Simba also offers an autoplay mode to its players wherein the game automatically spins for them in the number of spins set.

The savannah symbol represents the scatter which activates the bonus round of African Simba slot machine for a certain combination.

This is the only bonus feature in the game which grants you twelve free spins. There must be three scatter symbols present on the screen to initiate these bonus spins. All your winnings on this bonus round will have a multiplier by 3. The free spin bonus can be re-triggered during the course of this featured round.

Slot machine games themed after the safari are constantly gaining prominence among its gamers for its interesting in-game graphics and exciting gameplay. One of the known game titles with the similar theme is Rival Gaming's Wild Safari slot machine. Wild Safari is a five-reel video slot game which has 20 unique paylines and exciting in-game characters and symbols related to its safari theme. It also offers its players with huge amounts of winnings reaching up to 40,000 credits for a maximum wager placed.

You may now play African Simba's demo version in Cashpot Casino with no registration required. Players from Canada are also welcomed to try this game with free spin and no deposit bonuses when they play with real money wagers.