Adventures in Orbit
Enjoyed playing this game?
Rate it → 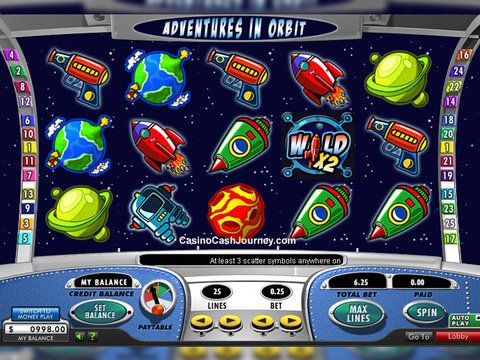 If you have dreamt of becoming a spaceman or an astronaut once in your life, then you don't need to imagine any more for we will bring you right into space with this new slot installment from 888 holdings software. In Adventures in Orbit slot machine, you get to lead your own voyage as a space traveler who is tasked to navigate the outer space and help Aoki - your alien buddy - to return to his own planet. You can now try this free play slot here with no download required.

This five reel slot game which has 25 unique paylines is available in both the online and mobile platforms for its players. You can place wagers for as low as 0.05 credits up to a maximum stake worth 5 credits.

Watch out for the different planet types which may pay you from 100 up to 250 credits. The alien items - which include a ray gun and an alien suit - reward you with at least 300 up to a 400 coins. There are also two spacecrafts which grant you with 500 up to 2,000 credits. The highest paying combination belongs to the flying saucer which pays you a 10,000 credit payout.

It also has two wild symbols on the reels. The first symbol is a simple wild symbol with a spaceship on it. This wild replaces any symbol on the screen - except for the scatters - and only appears on the second and fourth reels.

The second wild is the wild symbol with an "x2" on it. This only appears on the third reel. If it successfully replaces for a winning line, then the winnings are doubled for that round. If you land the highest paying combination which pays out 10,000 credits for a maximum wager of 5 coins, then you take home a whopping $100,000 payout.

There are also two in-game bonuses in Adventures in Orbit you have to watch out for. These are the free games feature and the Cosmos Voyage mini-game.

The briefcase serves as the game scatters which rewards you with bonus spins ranging from 10, 20, and 30 if you happen to land 3, 4, or 5 of these scatters anywhere on the reels respectively.

Meanwhile, the red alien character represents the bonus symbol which triggers the Cosmos Voyage bonus round. In this mini-game, you are given six rounds to aid Aoki in finding his way back to his own planet. If he has successfully returned to his planet, then you will be rewarded with exciting rewards.

Other Space Adventures on the Reels

If you're fond of space adventures, then you must also try World Match's Space Monsters slot machine. Space Monsters is a five reel slot machine game which has 20 paylines to play on. Place wagers for as low as one penny and start lining up different space monster characters on the reels to win exclusive cash prizes and earn the jackpot amounting to $7,500.

You can now try the demo version of Adventures in Orbit slot machine in 888 Casino with no registration requirement. All players from Canada are also welcomed to place their real money as wagers to get exclusive free spin and no deposit bonuses from the site.