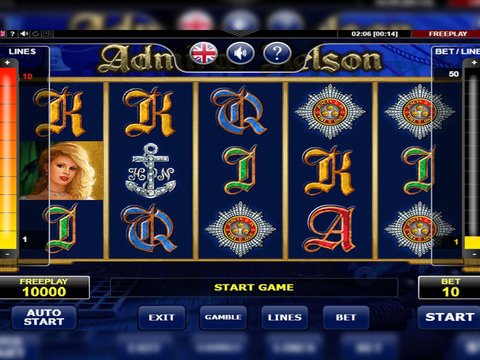 Fighting in wars may not be the most exciting thing especially if you're not courageous enough to sacrifice your own life while on it. Still, this does not mean that wagers wouldn't want to experience sailing through seas and defending the country on top of the legendary HMS Victory ship lead by the one and only Viscount Horatio Nelson. This domineering character has set upon a Legend that's hard to match and is on league with other pivotal characters in history. Through the Amatic Software you'll be able to stand beside this legendary character in a conquest for glory and victory with the Admiral Nelson Slot Machine. You'll even have the chance to amass fortunes along the way, either through rewards or plundering. Test the waters which the HMS Victory sailed through first, by playing and reviewing the game with no risks involved with the no registration and no download Admiral Nelson free play slot demo.

A Conquest for Glory, Victory and Domination

With many titles tied on the name of this great Admiral of the Sea, it is apparent that he has done meritorious service for years that lead to him being almost worshipped for reasons of epic proportions. Though the game itself may not be as proportionally outstanding and breathtaking as the feats and achievements of Horatio Nelson, it still suffices to provide a dark blue atmosphere that brims with the horrors of the ocean and war which the HMS Victory has conquered. The game is almost filled with the reels and controls of the game, with superb features you would love to get to know more about before playing. The 5 reels of the game comes with 10 pay lines while the controls allow comprehensive manipulations to your betting arrangements. It even comes with a gamble option for a chance to risk your win in a double-or-nothing luck-testing round. The game comes with several symbols worth taking note of during your journey. There are low-paying card icons, a ship anchor, compass and a divine-looking Frances. The wilds of the Game is the honorable Admiral himself with the highest-paying amount in the reels and the capability of a regular Wild. The Cannon Scatter symbol on the other hand, could provide multipliers while the special Ship Symbol has the power to render bonus spins.

Even with the thunderous reputation of Admiral Nelson shown in this Admiral Nelson Slot Machine, there's simply other more gargantuan characters that many wagers would love to see. If you'd like that as well, play the Napoleon Boney Parts Slot and delve back into the French Revolution in a way you wouldn't have thought of before. The game is aesthetically divine paired up with resplendent symbols eager to bring you a rewarding experience that may stretch far beyond your expectations.

Before going on board the HMS Victory Ship, make sure that you have already geared up yourself with everything you could use for in the impending conquest. We suggest players to go to Mars Casino to receive more benefits than you could hope for. The game welcomes players to its abode with a dollar-for-dollar promo up to $400 while being available through instant and even mobile versions. On top of that, you could also revel on the site's 50 free spins bonus, reload bonuses and more.