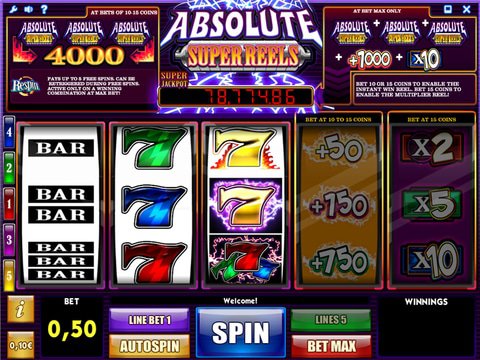 The Absolute Super Reels slot machine from iSoftBet is one of the developer's most popular slot machines for free and it is by far the most popular in the "Super Reels" series. It starts out with three reels, but based on the number of coins you choose to wager, you can activate up to five. Try it out right here when you review the Absolute Super Reels free play slot demo we have made available with no download and no registration needed. What's more, you can even try it out on your computer or your mobile device.

The Absolute Super Reels machine has only three reels if you bet fewer than 10 coins per spin, but when you consider that the bets range in value from $0.50 to $7.50, there's no real reason not to bet the maximum and activate all five reels. Here's how it works: When you bet 10 or more coins, you activate the fourth reel, which simply tacks on an amount of coins (up to 1000) if you win on the associated payline. If you bet 15 or more coins, you activate the fifth reel, which acts as a multiplier (up to 10x) that applies to not only your line win, but also to whatever appears on the fourth reel, too. That's a lot of money up for grabs.

Although there are no other games like this one out there, all kinds of slots have a fun, retro feel. Double Diamond from IGT is one of them, and while it is simpler than Absolute Super Reels by a mile, it still raises your anticipation. The three-reel, single-payline game has only one special symbol, the Diamond wild. It doubles prizes when one fills in, but it quadruples them if two appear to complete a combination. If all three show up, you hit the $2500 jackpot.