A Nightmare on Elm Street

A Nightmare on Elm Street
Enjoyed playing this game?
Rate it → 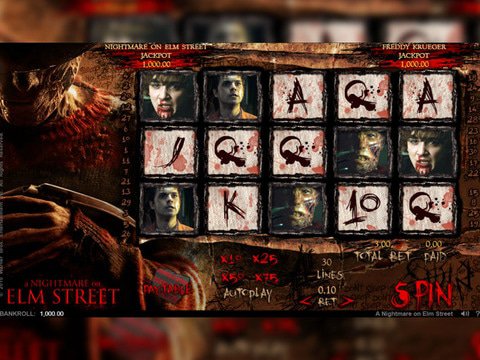 A Nightmare on Elm Street

Get thrilled, at the same time excited, on this up and coming slot machine game based on the famous suspense-thriller film with same title from 888 holdings software. In A Nightmare on Elm Street slot machine, you are again to be haunted by the infamous Freddy Krueger as you try to be successful on winning big and escape death from this mad man. Gear up and face your fears on this bloody free play slot game which you can now try here with no download required.

This five reel slot has 30 unique paylines for its online and mobile players. You can place wagers for as low as 0.01 credits up to a maximum stake worth 10 coins. This minimal staking value will definitely hook you up on this slot and encourage you to play with 300 credits per line, per spin.

To win big on the reels, you need to land winning combinations of the featured symbols and characters on your active paylines. These include the lowest paying card characters which pay around 50 up to 200 coins. There are also the famous 2010 movie characters which reward you with 300 up to a maximum payout worth 1,000 credits.

The highest paying combination belongs to Freddy himself which grants you a whopping jackpot amount worth 2,500 credits of your total stake. His character is also an expanding wild which expands up to reel 2 to substitute on a reel symbol to complete a winning line. If this replacement is successful, it doubles the payout on the winning combination.

Aside from the spooky experience, A Nightmare on Elm Street slot machine also offers you with exciting bonus features and rewards. Let's start off with the Pick-Me-Feature which is only activated when Freddy appears on the first and fifth reels at the same time. During this special feature, you get to pick an icon to reveal its corresponding cash prize.

Another special in-game feature involves the bonus symbols on the reels. You should land at least three of these bonus symbols on reels 2, 3, and 4 to activate the Never Sleep Again bonus round. During this bonus feature, you character should stay awake and prevent Freddy from entering your dreams for 4 rounds. You get to use several items which have corresponding winning values.

There are also free spin bonuses from the bloody claw scatter symbol. Win 10, 20, and 30 free spins if you land 3, 4, or 5 scatters on the reels respectively.

If you easily conquered your fears with Freddy, then you must try NYX's Psycho slot machine for another terrifying experience. Psycho slot machine is a five reel game with 25 paylines which was inspired by the 1960 cult horror film with the same title. You can place wagers for as low as 0.25 up to 50 coins per spin and get a chance to win the $125,000 jackpot.

You can now try the demo version of the featured slot in 888 Casino with no registration requirement. Canadian players are also welcomed to participate with real money wagers to get exclusive free spin and no deposit bonuses from this site.