1421 Voyages of Zheng He
Enjoyed playing this game?
Rate it → 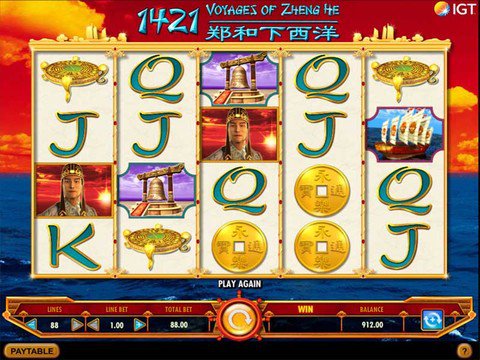 1421 Voyages of Zheng He Game Review

Roam the sea, find some treasures, and win large amount of prizes by playing the 1421 Voyages of Zheng He slot machine. This game is about the famous adventure of Zheng He. Allow him to tour you around the vast body of water and he might reward you with cash. Check out how to play the game by practicing the demo game on this page. You can review the game for free with no registration and no download needed.

IGT gaming software has been inspired by the remarkable journey of Zheng He, who is a Chinese explorer during the Ming Dynasty. He was known to be a great navigator as he travelled around Asia and Africa. Thus, the background of the game is composed of a blue sea and a red orange sunset. It is also interesting to see the navigational buttons forming a shape of a boat, probably representing the ship of our mighty explorer.

1421 Voyages of Zheng He slot machine has 5 reels waiting for you to spin. You can bet on up to 88 pay lines, which you can adjust depending on your preference. The amount of bet can also be configured using the buttons at the bottom of the screen. When you feel bored waiting for the reels to finish a spin, you can click on the Speed button to accelerate and show the result immediately.

Rewards from the Navigator

A ceramic plate, a jade dragon figurine, a huge bell, and a mighty ship are some of the symbols you will encounter on the game. The usual playing card symbols like 10, J, Q, K, and A are also included. Of course, our protagonist Zheng He is also used as an icon here and he provides the highest payout among the other symbols.

The lucky gold coin acts as the wild symbol that can replace the other icons to create winning combination. However, it cannot substitute the map, which is the scattered icon. Getting three or more maps will lead you to your lucky destination of special features. You will be asked to choose from 20, 15, and 10 free spins with corresponding amount of multipliers. If you're not a fan of free spins, you may opt for the Cup Feature wherein you need to guess where the golden ball is hiding among the three cups. Finding the hidden ball lets you win 79 times of your bet.

Aside from having a rich history with the dynasties, China has a lot more to offer in terms of myths and legends. See the Emperor of the Sea slot machine powered by Microgaming to get a glimpse of their belief on mythical dragons on the water. Like the Voyages of Zheng He, this game will also let you travel over the ocean through its 88 pay lines. Number 8 is really considered to be a lucky number for Chinese people; hence we got the same number of pay lines for both games.

To play with real money, visit 888 Casino. This gaming site is much recommended because of its good reputation in the gaming industry. It also offers 1421 Voyages of Zheng He free play slot. Canadian players are welcome to try this game on 888 Casino. If you prefer to bring the game wherever you go, you can use your mobile devices to access the gaming site.