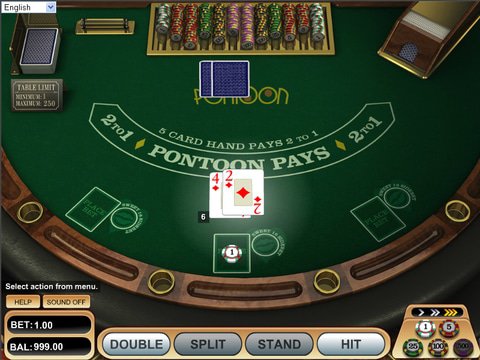 One of the variants of Blackjack made available is Pontoon. This is an old Parlour game that was played in Victorian England by middle class families and the wealthy and was also popular in the States.

The terminology that would have been used in the family game like "Twist" and "Buy" has been dropped in favour of keeping in alignment with what online Blackjack players are familiar with.

This basically means a player who wants another card will be presented with the more familiar "Hit" Button and if they wish to "Buy" another card, there option is standardised to that of the "Double" Button where their bet is doubled, just as with Blackjack.

The object of the game is the same with the player looking to achieve 21 to win the game. "Blackjack" has been replaced with the word "Pontoon" naturally enough, although the same card combinations in achieving it are still applicable.

Housed within this version of Blackjack is an additional option to play a side game called "Sweet Sixteen". On the Table, this is denoted by the circular space next to the card space for the player to click once he's selected his chips.

The payouts on the Sweet Sixteen side bet, are paid on the first two cards dealt. Any combination of cards from 16-21, the payout is 1:1, for one Ace the same again, with two Aces collecting 2:1. Pairs of 2s-7s are regarded as a Push.

Back to the main game, unlike regular Blackjack if the player matches the dealers hand, there is no Push, and he forfeits his bet. However there is an added feature which is called the Five Card Hand where collecting 21 with five cards, pays out 2:1 odds, just the same as Pontoon!

Get familiar with Betsofts Pontoon game at WinPalace Casino. Play it for free today!