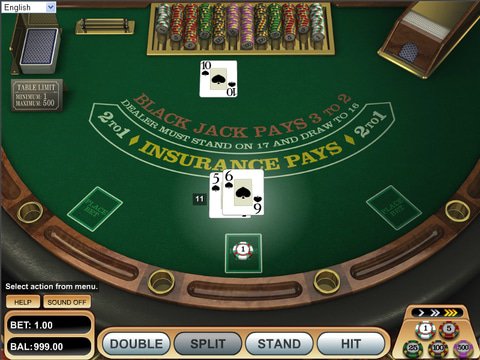 There are many blackjack games one can play along with legendary 3D slots. One such game is that of European Blackjack. For the players who like Blackjack but are unsure how European Blackjack differs, it's minimal. Here's how the game is played.

Unlike the American game of Blackjack, the European version is not played with 6 decks, it is only played with two decks of 52 cards. These are shuffled after each and every game.

The face up cards dealt to the dealer are done so one at a time. If when dealing the dealer receives an Ace, the player has the option to take out insurance. This serves as an additional bet along with his original stake. The odds for taking insurance are 2:1, here's an example of how this works.

The dealers' one face up card is an Ace, and the player is now asked would they like to take insurance. They have already staked $5 on the hand. If they want to take insurance against the Dealer getting Blackjack after receiving their second card, they click the "Yes" option in the newly opened panel and a further $2.50 is paid alongside their original bet for covering this.

Should the dealer be successful, the player taking insurance acts the same way as a push, he neither wins nor more importantly loses his $5. As a side note the insurance option decision has to be taken first before deciding whether to 'Double' or 'Split' the two cards they have been dealt.

A 'Split' can be made when they are dealt two cards with the same value, e.g. 2 tens. The 'Double' can be played if the two cards total 9, 10, or 11, thus offering the potential of doubling their game winnings.

An unrivalled experience awaits when playing European Blackjack for free at the WinPalace casino, come join the action, today!